A return to the buzzer

One year after the inaugural Dr Challoner’s University Challenge Derby, the teams returned to Dr Challoner’s High School to do battle. Beginning the evening was the highly anticipated teachers’ match. A strong team of Dr Fenton, Mr Healy, Mr Cadman and Mr Cavanagh, who had spent the day locked in ‘quiz camp’, limbered up to the stage, ready to avenge their defeat the previous year. However, as the match went on it became clear that DCHS’s fast buzzing would win them the game and they were soundly defeated 215-120, but not before Mr Cadman had proved his worth to the team by correctly answering a question on Hannah Montana. 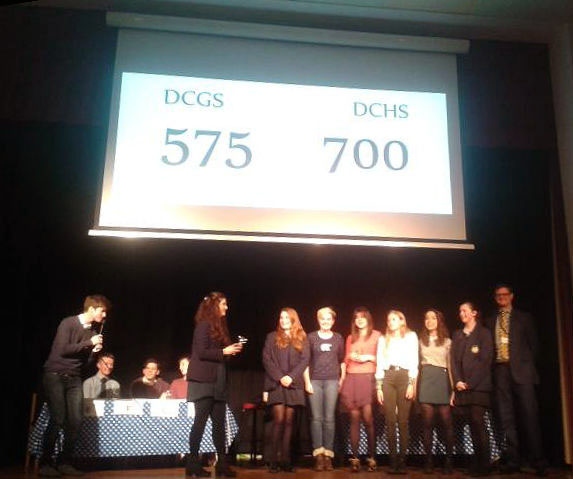 The Year 7 and 8 team of Max Iyengar, Peter Lilley, Fraser Barnes and Barnaby Flower had better luck, however, defeating DCHS comfortably 185-130. The Year 9, 10 and 11 team found themselves behind for much of the time and failed to overturn DCHS’s early lead, losing 200-110. The Sixth Form team of Niall Jones, Rob Prescott-Pounds, Elliot Christensen and Conor Davidson had a good start to the final match of the night, but soon found DCHS hot on their tail. The teams found themselves swapping leads and, with two sets of questions to go, it seemed impossible for DCGS to win, but two clean sweeps of correct answers and an incorrect buzz-in from DCHS put DCGS ahead, albeit by the narrowest of margins, to win 160-155.

Despite the 2-2 score-line, DCHS was granted victory on the overall points difference of 700-575. The night of excitement, very ambitious buzzing-in and tension was enjoyed by spectators and participants alike and I look forward to trying to avenge our defeat next year.