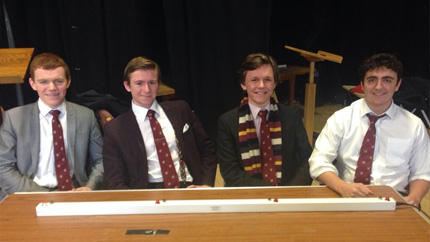 This term, boys from all year groups put together House teams to compete in the Challoner's University Challenge. The event sparked off fierce House rivalry and good competition which aimed to test the boy’s general knowledge.

School Captain and chief organiser of the event Nicholas Brabbs said, 'I had been worried that I’d be faced with a stark silence as these impossible questions were put to boys who were over five years away from university education. Clearly, I had underestimated the astounding knowledge of some of our best - a trend that was replicated across the school.'

The Junior competition resulted in a Thorne victory and an impressive performance by the Holman teams saw them win both the Intermediate and Senior competitions. Overall, the competition was a huge success with everyone having a lot of fun, from the competitors, to the spectators and even those with the unique opportunity to fill the role of the legendary Jeremy Paxman.