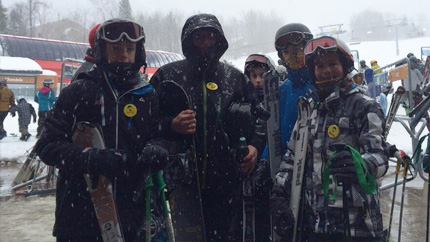 This February half-term saw students from Years 8 to 10 and Year 12 enjoy a beautiful winter visit to Maine in America. The visit was headed up by Mr Deadman and took an unfortunate start when they went to catch their flight at Heathrow: their flight was scheduled for a departure time of 9:30 am, yet it was delayed first by five hours and then until the next day! This prompted an unplanned overnight stay in a hotal; however the next morning the plane left at 9:30 and touched down in Boston at 12. This gave the students time to take a tour of Boston and stop by the Quincy Market. They enjoyed the food market and the shops before taking a bus up to the hills - into central Maine to the ski resort, Sunday River, where they stayed in the Grand Summer Hotel.

From there they took to the slopes, going down the mountains in small groups, guided by the brilliant instructors. The instructors pushed the boys to their limits, teaching them to ski 'off-piste', which is skiing on backcountry slopes that may not have been prepared especially for skiing. This was challenging and led to lots of falls; however, there were no injuries more serious than a few injured shoulders.

In the evenings, students made use of the facilities at the hotel: spending time swimming, tubing and taking part in the quizzes teachers ran. When in central Maine the students got time to visit an outlet mall, where they enjoyed time to spend money in the shops, taking advantage of the US economy to buy items much cheaper than in the UK. After four days of skiing the group returned home (on a mercifully uneventful flight), cherishing the memories made.