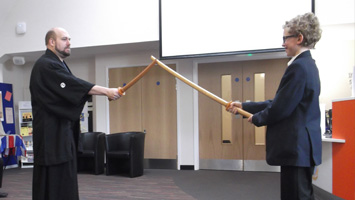 This Wednesday, in the Milton Library, Challoner's received an exhilirating introduction to kendo, a modern Japanese martial art. Mr Keen, bringing in two bokken - wooden swords in the fashion of katanas - and clad in full garb, taught the students about the principles of the martial art, and its techniques.

Giving the background of kendo, Mr Keen explained about bushido, the code of honour in feudal Japan, where the samurai lived by a strict set of rules, both in regular life and warfare. The samurai were meant to keep themselves disciplined, willing to live and die by the Emperor's will, and forbidden from lying, unless it was to protect the Emperor. This code, while seeming at first not to be applicable to sword fighting, is found within the teachings of kendo, designed to 'discipline the human character through the application of the principle of the katana'. Wielding his bokken, Mr Keen displayed some of the strikes for 'shikake-waza' and 'mji-waza': the offensive and defensive forms of Kendo, which serve to teach the wielder discipline and patience, as well as serving as physical training - the swords are not made to be light!

The students were all thrilled by the demonstration, at first merely by the chance to see an authentic - albeit wooden - sword; but then for the rich, compelling history of the art.