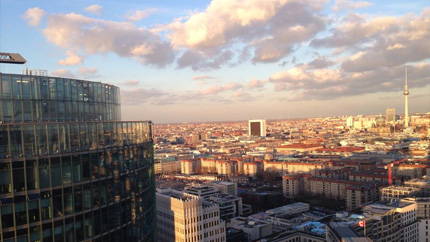 This half term, ten Year 12 students took part in an exchange with the Beethoven-Oberschule in Berlin. The main aim of the exchange was of course to improve and expand our German speaking skills - which we knew would be challenging. We were thrown in at the deep end by having to spend one entire week working in either a primary school or shop. I worked in a school and found myself with a different year group each day. I ended up teaching Maths and English on numerous occasions, which surprisingly was great fun. Being the small city that Berlin is, we also had to negotiate our way through different forms of public transport - which was difficult, to say the least.

One of the highlights from the trip had to be our afternoon at the ice rink. One of the more confident skaters, Hendrik van den Bout, impressed everyone with his professional–like technique, whereas some of us suffered bruises and bumps. Another high point was trying out some of Germany’s finest dӧner kebaps - a food that has become incredibly popular in Germany due to the large Turkish community that was established during the Wirtschaftswunder (economic miracle) following World War II.

All the boys thoroughly enjoyed the exchange and got on really well with their partners. Speaking on behalf of all of us, I would like to say a special thanks to Mr Parkinson and Mrs Whittle for organising the trip: they made it highly memorable!