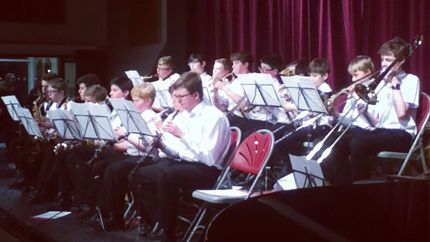 The Cabaret Night on Friday 28th February finished the first week back after half term in spectacular style. It took place at the school hall, which was packed out for the night. The Swing Band got the entertainment started with some phenomenal performances. From Glenn Miller's 'In The Mood' to 'Fly Me To The Moon'; ‘Mambo Number 5’ and 'Livin La Vida Loca’: to name just a few. There was definitely something to get everyone’s toes tapping.

Next up were the Jazz Workshop who gave a great performance, followed by the Ukulele Ensemble’s version of 'I Can See Clearly Now’. The smooth Sax Quartet added their own special sounds and Barbershop and Con Brio provided an amazing vocal interlude. There was also a sensational solo performance from Sam Wilson. It seemed the audience were really enjoying themselves, and it was fabulous to see such an extraordinary standard of music. The Jazz Band finished the night off in style with an extended set including 'Watermelon Man', 'Play That Funky Music' and 'Come Fly With Me'.

Together with cheeseboards and desserts to keep everyone going the whole evening was a resounding success! The Cabaret Night is definitely a highlight in the school calender and one that brings together the wonderful musical talent in both the boys' and girls' school. Congratulations to all involved, especially Mr Tansley and Miss Gee from DCGS, and Mr Tunnah and Mrs Korzinek from DCHS.

Also a huge thank you to the Friends of DCGS, for organising the evening and making sure everyone had such a great time.