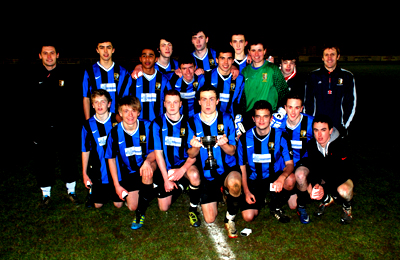 The school 1st XI defeated Aylesbury Grammar to win their third successive Bucks County Cup. The atmosphere was fantastic as over 400 supporters turned out at Chesham United F.C.

The team started well and took the lead after 5 minutes when Cameron Doogan scored after a cross from Tom Fouhy. The team dominated the first half but couldn’t capitalise on their superior possession. Cameron scored again at the start of the second half to double the lead – a superb finish from Jack Pounce’s cross. Having survived some Aylesbury pressure thanks to an outstanding defensive display, they then sealed the win when a 25 yard Tom Fouhy strike flew into the corner of the net.

The win has capped a brilliant season so far, and is the fifth time the school 1st X1 has won the Bucks Cup in the last six years.

We would also like to congratulate Tom Fouhy and Jack Pounce who played 90 minutes each for the English Schools Under 18 International team against Australia last Sunday. Despite the 0-0 scoreline, both players were commended on their performances, with Jack Pounce given the honour of being England captain.