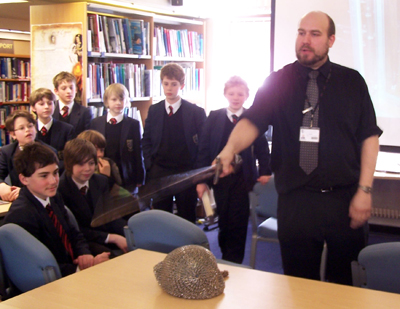 The LIC was host to a variety of different events to celebrate Humanities Week and none so popular as Mr Keen and his Viking presentation. This was enhanced by the chainmail hoods and suits he brought along, not forgetting the swords (blunt of course!).

Students listened intently as Mr Keen described how the Vikings lived, battled and partied, and were intrigued to learn that contrary to common belief, the Vikings bathed often, so were sweeter smelling than most of their opponents! They heard how the Vikings didn’t have a written language for a very long time so stories were passed down from father to son, and also the importance of the Final Battle, Ragnarok, thus they were buried with their weapons to protect themselves in the next world.

The grand finale was a demonstration of how well armour protected the brain (or not, as the case may be) against the strike of a sword, aided by a rather large watermelon, after which the students had the opportunity to try on the suits and hold the swords under supervision. It was a packed event and students are already asking when Mr Keen will be bringing his vast knowledge of Viking History, and of course his weapons and armour, into the LIC again!