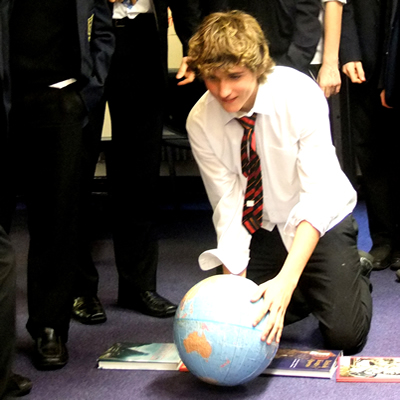 The inaugural Humanities Week enjoyed huge support from several hundred students from across all year groups during the first week in February. The diversity of events included Mr Keen’s Viking talk and Ms Leigh’s History of Chemistry where she charted a century of chemistry and famous chemists. N12 was full to over-capacity, as students watched The Flood, which depicts devastation in London when the Thames Barrier is overwhelmed by a huge surge of water.

Fascinating Sixth Form lectures included how local charity MapAction creates technological maps from information gathered at worldwide humanitarian disaster scenes, which then aid the relief effort. Year 12 Economics students enjoyed a lecture entitled “The third phase of the global crisis”. The Humanities house events enjoyed close finishes such as the middle school Rayner team winning by a single point, thanks to a tactical last bowl in the Globe Bowling.

There is no let up in the Humanities subjects this term, with Year 9 Natural History Museum visits recently completed, a Year 8 Commonwealth Enrichment Day planned, along with History Battlefields visits and a Politics Question Time to include local MP Dominic Grieve as a panellist.