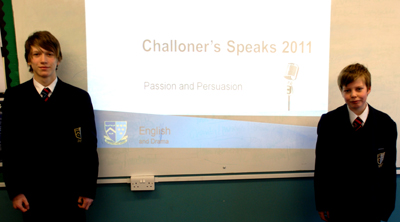 Challoner's Speaks is an annual public speaking contest organized by the English and Drama Team. Building on the success of last year’s inaugural event, every student in Years 7-10 was tasked with preparing a five minute speech to be presented in English lessons. This year’s theme was Passion and Persuasion which led to a remarkable variety of thought-provoking speeches. Plenty of students felt very passionately about HS2, others about topics as diverse as the impact of the media on today’s teenagers, unjustified criticism of air transport, cuts to the Army’s budget, and reform of the prison system.

Our guest judges of Dr Fenton, Mrs Penton-Hauchard, Dr Pegg and Mrs Swain from the governing body were impressed by the confidence, sophistication of argument and sheer panache of the finalists. Every year group’s final was keenly contested: Israel and Gaza, the pitfalls of technology and the return of the Elgin marbles to Greece are just a small selection of the topics for speeches that made it through to the finals of this year’s Challoner’s Speaks. Certificates and small prizes went to the winners from each year group: Robert Farquhar (Year 7), Patrick Cummins (Year 8), George Burke (Year 9) and Charlie Brewer (Year 10).All entries gained points in the annual House Competition.

Thanks to the English and Drama Team for another fantastic event designed to help our students become competent and creative communicators!