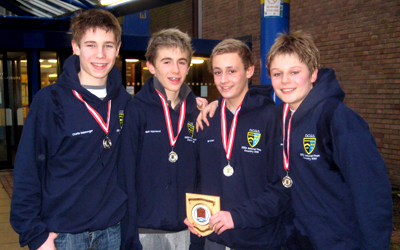 Our junior swimming team competed in the National Relay Finals in Coventry on Saturday 6th February.

In the medley relay, the team of Max Elphick, Matt Hazelwood, Ben Levart and Charlie Messenger came third in their semi final to qualify for the final. A fifth place finish in the final then followed, which was an excellent achievement.

Max Poplawski replaced Max Elphick for the freestyle relay event. We had qualified for the National Finals as the sixth fastest team overall so we were not expecting as much success in this race. However, the team swam superbly in the semi final to finish second and qualify for the final as the third fastest team. This gave them a chance of a medal place! The final itself was one of the most exciting races seen all day, and one of the best performances ever seen from a Challoner’s team. Ben, the anchor man, gave an amazing performance and came second by a fingertip, securing an unexpected Silver medal for the team.

This was an outstanding achievement for a dedicated group of swimmers and the first time that our Junior Swimming Team has achieved a medal at the National Championships – well done!