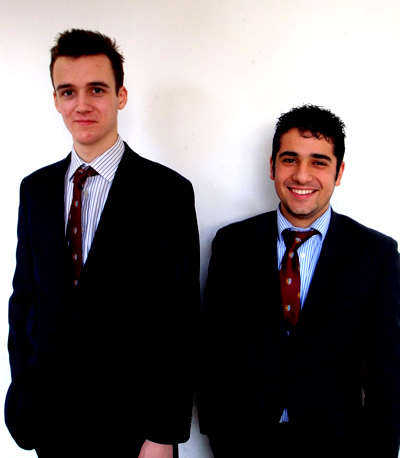 On Tuesday 19th January the DCGS Senior Debating Society sent three teams to Magdalen College School, Oxford to compete in the regional round of the Oxford Union Schools' Debating Competition. This competition is widely acknowledged as the most prestigious of its kind, and the Oxford round is extremely competitive, featuring some forty teams.

The evening's first debate was on the motion "This House Would Ban Pornography". Two of our teams had to focus on arguments proposing the motion whilst the other opposed it. All three teams acquitted themselves well debating this tough motion and when the teams were announced for the second round, it was clear that two of our teams were in with a chance of progressing to the Finals Day in March.

In the decisive second debate (This House Would Abolish the Inheritance Tax) Stefan Ellender and Cyrus Davami destroyed their opposition. When the final results were announced we were delighted to learn that Stefan and Cyrus were the Regional Champions. This is the third year in a row that Challoner's has sent a team to Finals Day (a rare and impressive achievement), but the first time the team has advanced as Champions. Congratulations to all our debaters, and good luck to Stefan and Cyrus for the Final!