Ambassadors at the Concert Club

NYJO aims to promote jazz through world-class performances and education work - and during its 54-year history, it has grown from a single orchestra to an organization that is involved in jazz education at all levels across the country. NYJO has helped launch the careers of many of the UK’s most admired singers and instrumentalists, including Amy Winehouse.

The workshop was hugely enlightening; it prompted us to consider how we shape the end of notes and helped to develop our sense of groove through some entertaining scatting exercises. Following this, and armed with a newfound appreciation for tongue-stopping the end of notes, the DCGS Jazz Band performed alongside the NYJO Ambassadors Sextet for a concert consisting of classics from the Great American Songbook as part of the Amersham Concert Club season at Amersham Free Church. With Mark at the helm, we performed Lullaby of Birdland, Misty and Watermelon Man, featuring excellent solos by Beri Valentine (trumpet), Josh Yarrow (trombone) and Alastair Hughes (tenor sax), all of which were hugely popular with the sold-out audience. 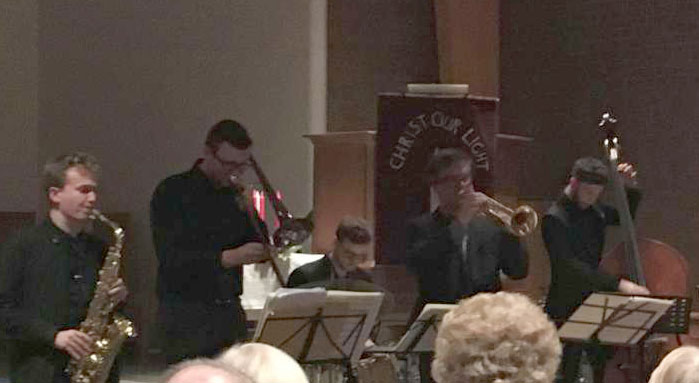 The programme continued with the Ambassadors Sextet playing tunes from the jazz icons of Ellington and Basie amongst others, and showcasing amazing solo performances by members of the NYJO, including superlative playing by Mark himself on the trumpet. The setlist spanned Take the A Train, Shiny Stockings and Caravan in the first half and, in the second, Dolphin Dance and Autumn Leaves, followed by a medley of ballads. Lastly was I Got Rhythm, with different jazz tunes (and a humorous rendition of The Flintstones theme) being overlaid on the familiar progression.

Due to audience demand, the Ambassadors returned for an encore that again highlighted their individual and collective skills, drawing great applause from all corners of the church.

As a whole, the day was a fantastic opportunity for the DCGS Jazz Band to work with NYJO members and take part in a superb concert. Huge thanks must go to Mr Tansley and Mark Armstrong as well as the NYJO Ambassadors.