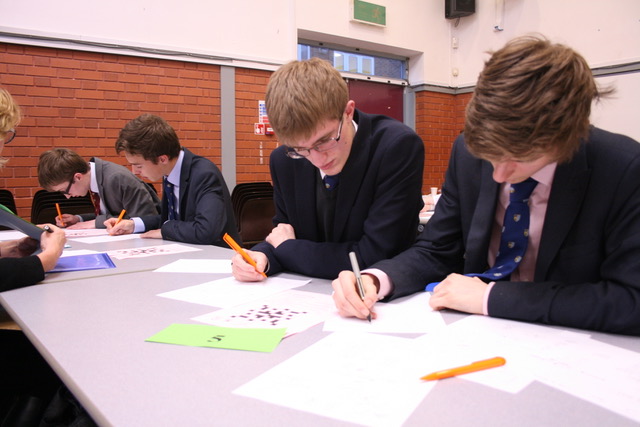 Every year the UK Mathematics Trust puts on the Senior Maths Challenge, an hour and a half long paper of 25 questions that 99 DCGS students took part in during school time. The challenge stretches even the most able students and this makes it incredibly useful for applying back to A Level subjects. 32 DCGS students were awarded a Gold, 33 a Silver, and 27 a Bronze. The challenge also acts as a gateway for students to take some further maths papers, with those who achieve a Gold being entered into either the Senior Kangaroo or the British Maths Olympiad Round 1. The challenge itself, and the further competitions that it leads on to, aim to stretch participants. The often devious questions are not directly subject-specific, and so DCGS encourages students from Years 11 to 13 to participate.

25 students in Years 12 and 13 went on to take part in the Senior Kangaroo, along with Brendan Emmanuel in Year 11. Of these students Taneisha Atkinson, Jack Bowe, Harry Cox, Brendan Emmanuel,Caitlin Frank, Thomas Franks, Donjeta Lumley, Aaron Merle, Jack Redford and Louis Southwell passed with merit, an accolade earned by less than 25% of the students who took part in the challenge nationwide. The three and a half hours given to complete the even more prestigious (and difficult) British Mathematical Olympiad opening round makes it something of a marathon. This paper was taken by Thomas Haslam, Amri Shakir and Elena Sheppard, all in Year 13, with Thomas and Amri gaining a distinction. Congratulations to everyone who participated.

Test your skill against some of the problems