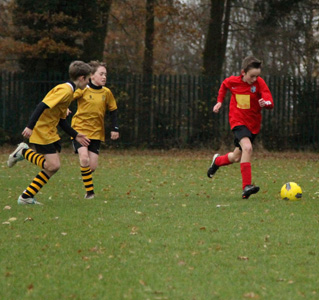 The team managed excellent away wins over Charters School (3-1), Langley Academy (11-1) and London Nautical School (4-0) to set up a Round 5 tie with Hampton School. A trademark display of swift, counter-attacking football saw DCGS carve out a number of great chances to win but with the scores level at 0-0, the game headed for extra time. DCGS pressure eventually told with man of the match Cameron Reid's pace, energy and determination on the right wing leading to what looked to be the winning goal for the home side courtesy of Reid himself, only for Hampton to score out of nowhere with only seconds remaining. With no time for a DCGS response, the game went to the penalty shoot out. Hampton won 4-3 on penalties: a cruel defeat, one of only two this season in all matches played, both competitions and friendlies. Nevertheless, over the course of the season the well-drilled side have exhibited an attractive style of football and demonstrated great ability.

The A team have defeated Chesham Grammar (7-0) and Holmer Green (4-2). They face a home quarter final fixture against John Hampden in January. Standout performers for the A team, in an excellent team unit, have been Cameron Reid and James Fahmy, while the top goalscorer has been Cian McGuinn with 16 goals.

The B team have also shone on the national stage, defeating Maiden Erlegh School (4-0), Monks Walk School (3-0) and Northampton School for Boys (7-0) in this incredibly tough competition. At the time of writing, the side face Eastbury Comprehensive School in the last 16 of the competition (this game will be played on Wednesday, 11th December). The standout performer has been James Perks with 7 goals in the competition.

Our team won District Finals of the ESFA 5-a-side National Cup, topping their group. They then went on to defeat Misbourne 4-0 in the Semi Final and the Chalfonts 3-0 in the Final. Cameron Reid scored 6, Fahmy 4, McGirr 3, and McGuinn 2 overall in the competition. As District Finals winners, we have qualified for the Area Finals in January. The team have played brilliantly well this term, and look forward to further fixtures and competitions. Good luck to all the boys involved.