Drama in the House Competition 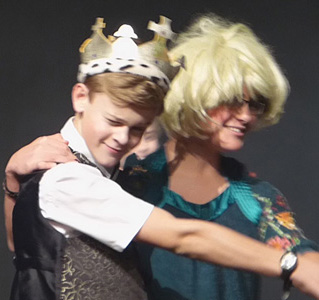 The annual house drama competition is always one of the highlights of the year and this year was no different. The scripts were taken from Roald Dahl’s Revolting Rhymes series; a collection of fairy-tales that adds a dark and humorous twist to the famous stories and as you can imagine gave students a chance to go a bit crazy with props and costumes. After only a week of practise the six houses had to perform, three at a time, to an audience at lunchtime. The judges this year were drama teachers Mr Flower and Miss Brassell and an assortment of English teachers.

After the heats, Holman, Foxell, Newman and Rayner made it through to the final. It was a close-run contest between Foxell and Holman with Laurence Hodgson, who had recently directed the senior play As You Like It, helping out Foxell. In the end, Holman were announced winners and given a suitable reward. Although many will protest, what is done cannot be undone! (Lady Macbeth)