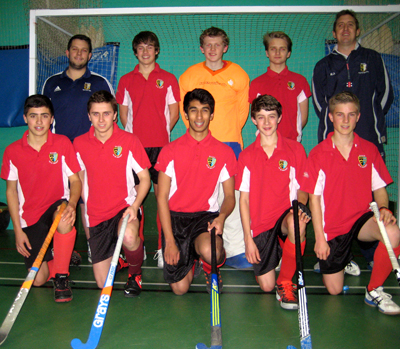 At the beginning of December, the Under 16 indoor hockey team travelled to Whitgift School in Surrey to take part in the South Regional finals, a tournament comprising of the top 12 sides in the South of England.

They started impressively, beating Kingston Grammar, Trinity School and Portsmouth Grammar before a comprehensive 6-0 win over local rivals RGS High Wycombe put them through to the semi-finals where they faced RGS Guildford. A fast start to the game and some clinical finishing resulted in them racing into a 5-0 lead at half time and they held on in the second half to make the final against the hosts, Whitgift, who had 3 England players. Our team fell behind but equalised with 30 seconds to go to take the game to a penalty flicks decider. Unfortunately, the Whitgift keeper saved 2 of their flicks and they had to settle for a runners-up spot. However, the disappointment was short lived as they realised they had qualified for the National Finals late January.

Duncan Scott was the top scorer in the tournament and the team was captained superbly by Aaron Bhatia. The rest of the squad was Karanvir Sagoo, Jordan Huggett, Toby Wilson, Harvey Preston, Jasper Copp and Alex Sweet.