Theatre at its Best 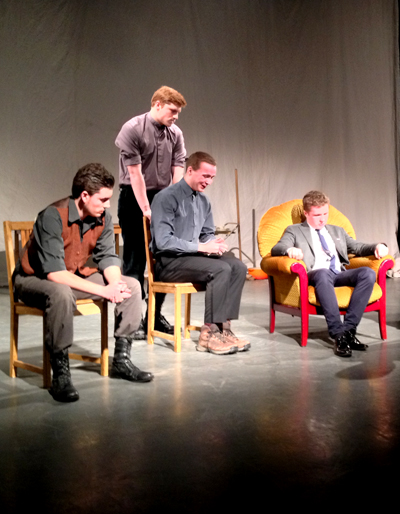 This year's Senior Play was a production of Tenessee Williams' 'A Streetcar Named Desire'. For the first time, this production was entirely led by students. Edward Armstrong (Year 12) took on the role of producer, liaising with the director, Scott Brooks (Year 13), and the technical director, Elliot Lewis (Year 12). Together, along with a team of over 35 students, they undertook the multitudinous responsibilities of producing a play, from lighting to costume, publicity, set construction. Scott took full creative control for the performance, casting actors from Years 12 and 13 at DCHS and DCGS, and rehearsing for 8 weeks leading up to opening night. The total commitment of all the students involved meant guests enjoyed a mature and professional production of Williams' iconic play. The lead roles were vividly and ably portrayed by the sixth form students who, together with a fantastic ensemble, brought Williams' dark exploration of desire, mental illness, family, and relationships to life in a fully immersive fashion.

Year 13 Theatre Studies students were also tremendous in a devised production ‘Edict’. The five students worked for 11 weeks to create an often shocking and dark exploration of the nature of the individual within an oppressive society. Edict drew ideas from Orwell's 1984, as well as more recent populist works, to reflect on how empires are built through rules and control. This ensemble performance worked to excellent dramatic effect in the final climactic scene; moments of brutality were weaved with carefully crafted scene work, allowing characters to emerge and giving the audience a creeping sense that they too had a responsibility in the events that unfolded.

Congratulations are due to all involved in both performances which have raised the bar even higher for future groups.