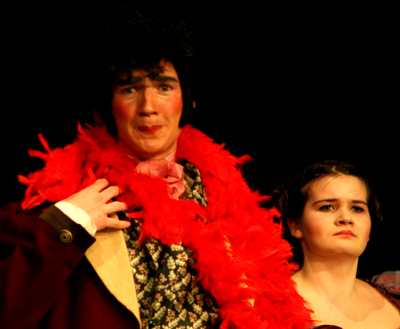 The school hall was recently dazzled by the senior play, London Assurance, written by Dion Boucicault. Faced with a far shorter rehearsal timeframe than usual, the cast struggled initially to create humour from a play very different to anything they’d seen before. Ranging from slapstick to innuendo, in both the spoken and physical, the comedy of the play offered something for everyone, resulting in many of the actors struggling at times to keep in character and not burst into laughter!

London Assurance told the story of Sir Harcourt Courtly’s valiant attempts to secure the love of Miss Grace Harkaway, but he is sidetracked by the equally extravagant Lady Gay Spanker despite the fact she is already married to Adolphus "Dolly" Spanker. The son of the aforementioned dandy, Charles Courtly, seen by his father to be a ‘studious, sober boy’, turns out to be the very opposite end of the spectrum. When the triangles of love are put into the picture, hilarity ensues.

Will Pemberton, who played the part of Sir Harcourt Courtly said”overall the actors had a great time, despite the huge physical strain of the piece. Personally, I could barely find enough hours in a day to regain my stamina and flounce around the stage! The play would be nothing without the commitment of its actors, crew and Mr. Millar and thank you to the audiences who came and gave our hard work the most important aspect, laughter!”