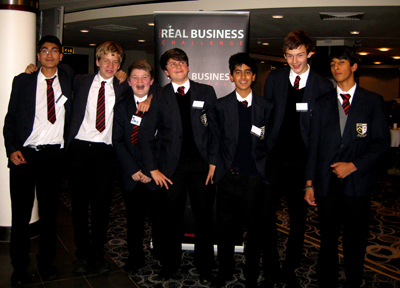 Following on from their Dragon’s Den experience last October, the winning team of business students were given the opportunity to pitch their idea at the Regional final of Coca Cola Enterprises’ Real Business Challenge, a national competition for Year 10 students. The challenge is an annual initiative linked to the national curriculum and is designed to give students genuine business experience as well as encouraging some of the skills and attributes needed in a work environment.

The competition focused on sustainability and is being offered as part of Get Set, the official London 2012 education programme. They were asked to create a campaign to encourage Londoners to engage in recycling during the Olympics in order to portray their city as a World leader in environmental concerns. Using the slogan ‘Reuse, Recycle, Revive Your London’ the students produced a radio advert and gave a presentation to a team of senior staff from Coca Cola. They were scored on their enterprise skills, including team work, creativity, business viability and presentation skills.

Our students were up against 21 other teams from across the south of England and performed exceptionally well in this prestigious competition. Their efforts were recognised and they were awarded second place, a great achievement! They have subsequently been invited to Ashridge Business School in Berkhamsted to repeat their presentation which will give them more experience of a business environment to aid them in future enterprises.