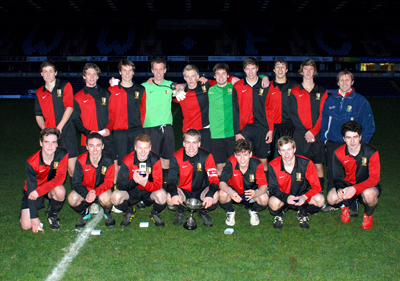 Thanks to JandL Travel coach company and their owner Ian Smith, who sponsored this match, the boys were able to raise enough money, and realise a dream to play this year's Bucks Cup Final at Adams Park on Wednesday.

Having won the group stage of this year's Bucks Cup with 5 wins out 5 (scoring 28 goals and conceding just 4), we defeated Sir William Borlase Grammar school (7-3) and Burnham Grammar School (4-3) in the knockout rounds to reach our fourth final in five years.

After surviving the opening 10 minutes of pressure, we began to play our normal attractive football. After 20 minutes, a great run and cross from Jack Pounce was met by Jack Roberts who slid in to make it 1-0 to Challoner’s. Then, five minutes later, Roberts again scored as he held off two defenders, turned and shot into the top corner. Tom Fouhy then also capped a great first half performance by adding a third goal after a pass from Ryan Trafford.

Despite a 3-0 half time scoreline, we were determined to improve our attacking play during the second half and give the large travelling support more to cheer about. After surviving a lot of Stantonbury pressure at the start of the second half, we counter-attacked to score again. Tom Fouhy’s fine run and cross was met by Alex James, who set up Nathan Key for a clinical finish. 4-0 to Challoner’s. We did allow our opponents a consolation goal when Garry Emery, having made a fantastic tackle only 5 seconds earlier, then hauled down a Stantonbury player for a clear penalty.

However, Challoner’s were not to be denied, indeed we could have added to our tally during the final 10 minutes as Billy Airey, Henry Mulligan and Nathan Key all came close to scoring.

This was a memorable occasion for all of the players, and also for our fantastic group of staff and 6th formers who were there to provide much needed vocal support. The Under 18 Bucks Cup has now been lifted four times in five years by Dr Challoner's - an outstanding achievement in one of the most keenly contested competitions in Bucks. Jack Roberts (20) and Tom Fouhy (15) have scored a total of 35 goals in our 12 games this season.