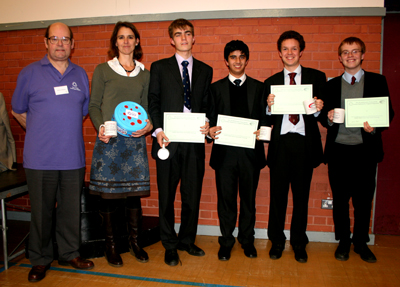 Four further mathematics students were selected to represent the school in the 2010 Regional Final of the Senior Team Maths Challenge held at John Colet School in Wendover. Our team consisted of Ed Hinton, Tim Davies, Cameron Ford and Izhan khan.

They competed against 19 other teams and got off to an amazing start, scoring full marks in both the Team round and the Cross Number Round putting them in the lead. The third and final round was the Relay, where each answer was dependent on the answer from the previous part of the question. The team started strongly, scoring highly on the first 3 sub-rounds. The final sub-round proved extremely challenging and a wrong answer early on meant that the team lost a massive 12 marks.

Overall, they finished in second place, 2 points behind Aylesbury Grammar. It is possible that their score may be sufficient to qualify for the National Finals which are to be held in London early next year. Very well done to all the team for an excellent effort.