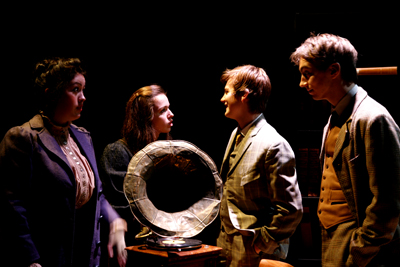 This year’s Senior Play was a resounding success with a group of highly talented actors from both schools performing four sell-out nights.

Directed by Miss Gallagher and produced by Mr Flower, the play tells the story of a flower girl’s journey to become a ‘duchess’ under the tutelage of Professor Henry Higgins. However, the cast and crew learned that Shaw’s original play was a deeply critical polemic on the issues of social mobility, language and gender in Edwardian England. Developing the story from ‘page to stage’ was daunting as actors faced the challenges of understanding Edwardian social values and delivering complex dialogue. However, this group of students more than rose to the challenge. Tom Pemberton’s Professor Higgins was a tour-de-force of richly realised characterisation. Imogen Turner sensitively portrayed Eliza Doolittle’s rise from flower girl to ‘duchess’, transforming her accent, movements and demeanour as the performance progressed. Will Dawson, Michael Ferdenzi and Chrissy Smith provided stellar character roles, providing much hilarity as the drama of their lives unfolds. Indeed, although the themes are complex, the play in performance is very much a comedy and the memorable tea party scene left sides aching!

The entire cast and crew were thoroughly committed and disciplined, resulting in a professional polished performance. The cast were supported by a fantastic technical crew, led by Jack Elderfield, who managed complex scene changes and designed lighting which enhanced the beautiful set and costumes.