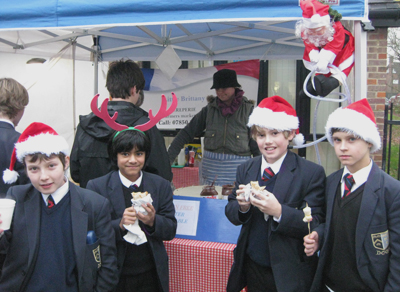 The Languages team organised a highly successful Christmas Festival for the second year running. The event ran over Monday and Tuesday of this week with year 9 boys running an assortment of stalls. Carols were sung in three different languages and there were many quizzes and games to stretch the students understanding, made easier by the French chocolate prizes!

Students were able to use their language skills to order and sample tasty traditional fayre from France, Germany and Spain, with the highlight for many being given the opportunity to buy freshly made crepes, hot apple punch and chocolate fountain covered fruit and marshmallows.

All proceeds from this event will go to the Dreamflight charity, which organises holidays for seriously ill children.