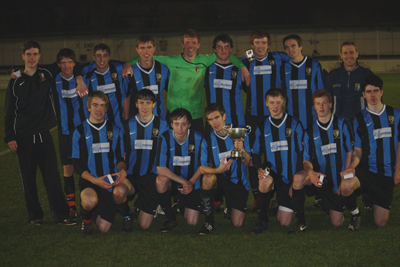 On Wednesday our 1st XI met Aylesbury Grammar School in this year’s U18 Bucks Cup Final, the pinnacle of our season.

After 25 minutes of a competitive match, the game sprung into life as Aaron Benmore put us 1-0 up with a superb individual goal. We held onto this lead thanks to a great save from Steve Harris and a goal-line clearance from Jack Pounce. Ten minutes into the second half we extended our lead with a fantastic team goal, finished by Andrew Keenan, who cut inside and curled a superb left footed shot into the corner. Aylesbury responded with effect and drew level to force extra time. The Challoner’s team showed immense character to keep out our opponents and force a penalty shoot out.

Penalties were traded and with one miss each, the score rolled to 9-9. It was left to goalkeeper Steve Harris to take our 11th penalty, which was saved. But within a minute one of the most heroic acts ever seen on the football pitch occurred, Steve picked himself up off the turf, and saved the next 2 Aylesbury penalties to win the cup for Challoner’s and signal a pitch invasion from our loyal travelling supporters. Congratulations to the team and coach, Mr Deadman.