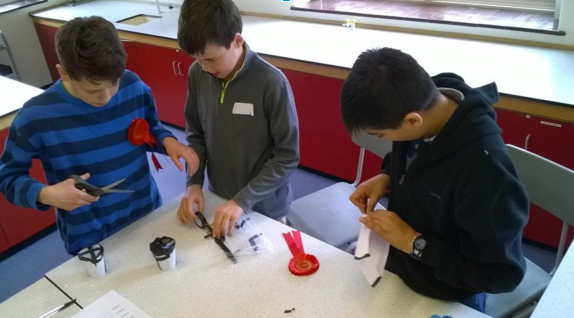 On 4th April, four teams from schools in Buckinghamshire gathered at the Wycombe Abbey School to take on the Physics Olympics, which was supported by the Ogden Trust.

The Ogden Trust, who ran the event, promote the teaching and learning of physics through programmes and projects supporting physical science in schools. The trust was set up by Sir Peter Ogden - who donated £22.5million in order to help less fortunate children to be better educated. Some of the exciting experiments included:

“A bridge too far” in which teams had to construct the widest span of bridge using only Jenga bricks. “Payload”, in which a boat had to be made from the given materials, to hold as many marbles as possible. We ran out of marbles for the winning boat at 255 and had to resort to adding 10g masses until it sank! “Pulling Power”, requiring the manufacture of the strongest possible electromagnet from given equipment. Early designs were tested and then dramatically improved to give an exciting and competitive end to this event!

Despite a total whitewash by Wycombe Abbey school, DCGS managed to pinch silver and bronze medals whilst all competitors went home laden with Ogden goodies, crème eggs and the helium balloons from the event. The day was thoroughly enjoyed by all and left many wanting to come back next year. One student said that he liked “Animal Crackers” best as he could use some maths to work it out. Overall though the Ogden Physics Olympics left us with enthusiasm, confidence and a burning curiosity to learn more about physics. Thank you to David Morris, Mark Robinson and Elizabeth Lee who put a huge amount of work into getting the event together, to the teachers who came and helped out, and to the Ogden Trust for sponsoring this event.