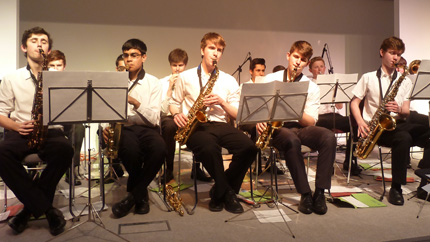 On April 23rd the Jazz Band took part in the Amersham Music Festival. Accompanied by a solo piano performance by Sam Wilson and the saxophone quartet, the group performed a one and a half hour set in King’s Church, Amersham. The band played a variety pieces ranging from jazz classics such as April in Paris to more modern funk pieces such as Tower of Power’s You’re Still a Young Man.

The evening was a great success as the band gained valuable experience playing such a long set in front of a new audience. With the band's performance so well received, we hope to return to the festival next year. We have both Mr Tansley and Mrs Partridge, the event organiser, to thank for this wonderful opportunity.