House Sport to End the Term 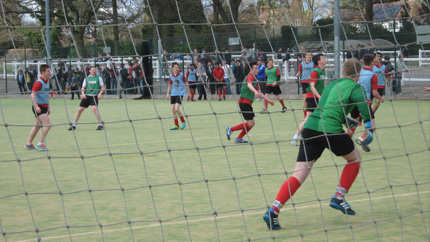 Once more, the football season started: students from Year 7 to Year 12 donned their trainers and brightly-coloured bibs as a series of exciting and often tense football matches were played on the astroturf with each house vying for victory. In the Year 7, Thorne swooped to victory in both the A and B competition, with Newman winning the Year 8 competition and Foxell winning the Bs. In Year 9, Foxell won both competitions and Pearson won in Year 10. After a close game against Newman, Foxell achieved victory in Year 11 and in the Year 12 competition, Rayner were the champions.

The Year 7 House Hockey tournament took place on the 26th March, and was an exhilarating, hotly contested competition that went right to the wire. Some extremely close victories and dominations came from the houses. The standard was incredible, with many county players involved. Both Holman and Thorne won all their matches up until the final, where Will Hardman scored the decisive goal for Thorne to win 2–1. Everyone who participated did their house proud, and Thorne were the worthy winners; congratulations to them. Hopefully next year’s competition will match this incredible tournament. Thank you to Mr Patterson for organising the event.

Unsurprisingly, the Year 9 competition was as exciting, if not more exciting than the Year 7 competition. With such a large squad this year, many people signed up to take part and the majority of them were very able players. Holman played very well, mainly due to the sheer number of county and squad players: Foxell also proved tough competition. Rayner were perhaps the dark horses of the event - they only had a couple of A team players but more than matched the rest of the houses. Thorne were consistent and have many players that are rapidly improving and could be scoring goals for Challoners next season. Thanks go to Mr Bristow for organising and to the Sixth Forms who helped referee the event.