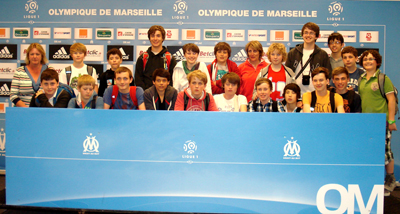 During the Easter Holidays the first leg of the Junior French Exchange set off to meet their partners in Marseille.

Basking in the glorious spring Provencal sunshine, the group enjoyed a range of excursions whilst their French counterparts remained in school as their holidays were later. They visited the Roman amphitheatre in the attractive city of Arles before driving through the Camargue to the pretty sea-side town of Les Saintes-Maries de la Mer, keeping an eye out for the white horses, black bulls and pink flamingos that typify this natural park.

After a ride through the old quarter of Marseille on the Monday, they enjoyed an exclusive tour of the OM Football stadium and were impressed not only by the architectural changes that are being implemented, but also by the environmental approach which will complement the new stadium. On the last full day, they took a coach to visit the mediaeval village of Le Castellet prior to enjoying the quayside market in Bandol. It was then on to Cassis where the group were treated to a meal in a restaurant before riding the waves on a boat trip into the Calanques. Firm friendships were forged and lots of French spoken and understood and they now look forward to receiving their French friends in May.