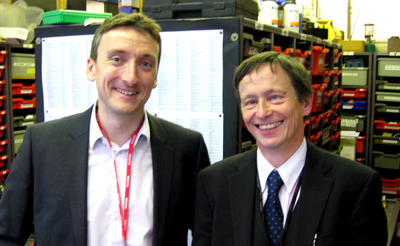 The Engineering Society was delighted to welcome Andy Latham from McLaren F1 who came back to Challoner's to talk to students in Years 10 to 13 about his experiences. As an old boy of the school, Andy was inspired to study engineering having been taught by Mr Clare, who was also his form tutor.

Andy spoke about his work at McLaren and gave a fascinating insight into the different aspects that combine to create the amazing speeds in F1, from the tyres, lightweight, powerful engines and aerodynamics. He also explained his role as Lewis Hamilton's Race Engineer, the excitement of travelling round the world and the stresses of being in charge of strategy for each Grand Prix.

It was great for the students to see that someone who was in their shoes a few years ago has risen to such a high profile job and they appreciated the down to earth and thoughtful way he spoke and interacted with them.