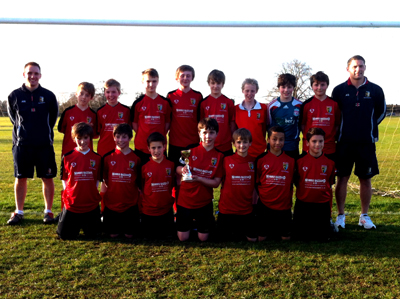 The Year 7 Football team were crowned County champions after an emphatic 11-0 victory in the final over Denbigh School. The students had been brilliant in the build-up to the final, knocking out Buckingham, John Hampden, Princes Risborough and St. Pauls scoring an impressive 34 goals and only conceding 3.

In the final they got off to a great start at Fairford Leys in Aylesbury with two early goals from Will Simmonds and Alex Jones. The team continued to play some fantastic football and by half time were leading the game 6-0 and in a strong position. In the second half they kept the pressure on, with the midfield combination of Adam Riley and Chris Allan creating the majority of the chances.

The game finished 11-0 with the goal scorers being, Chris Allan, Will Simmonds, Alex Jones, Marcus Tingey and Jaime Aldred. Matthew Jones lifted the trophy as captain to crown a very successful season for the year 7 Football team.

The Year 10 Football team compete in the County Cup Final against John Hampden on Thursday, May 10th. The match is being held at Adams Park, Wycombe wanderers FC with a 4.30pm kick off.