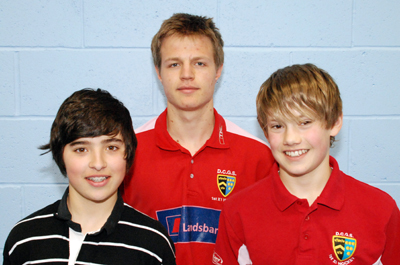 It has been a magnificent season for the hockey squads and for the first time ever, they have become County Champions in three different age groups.

In the Under 18’s they faced strong opposition in the quarter and semi-finals but came through to win by one goal in each game. The final against RGS High Wycombe was tough but thanks to goals from Jamie Bristow and Tom Fouhy, the victory was sealed by two goals to one. The team has been superbly captained by Giles Kilbourn, who has represented the 1st XI at Challoner’s for four seasons, a brilliant achievement. The Under 14 team won their competition in more convincing fashion, beating Sir William Borlase’s 7-0 in the quarter final, followed by a much closer game against RGS High Wycombe in the semi-final when a 2-1 victory was achieved. Stowe were defeated in the final 4-1 thanks to a superb hat-trick from Duncan Scott. The team have been led impressively by their captain, Jordan Huggett, and have won the majority of their matches this season. In the Under 13 Mini’s competition, again our team faced strong opposition in a round robin format. In the four matches, they won 3 and drew the other to become champions, scoring 13 goals in the process. The tournament top scorers were Duncan Scott and Tom McKinlay with 5 goals each and the team captain is Alex Sweet, who along with Duncan, plays for the Buckinghamshire County squad.

Hockey at Challoner’s has gone from strength to strength in recent years thanks to an extensive and challenging list of fixtures against established hockey schools in the South of England and now all three of these teams will go on to represent Buckinghamshire in the South Regional competition.