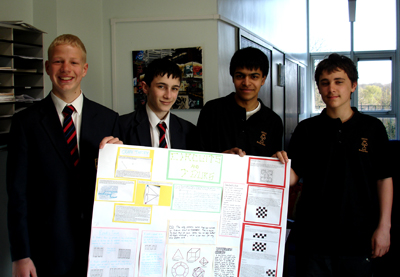 The competition, aimed at able year 10 mathematicians from Bucks grammar schools, was split in two parts, with separate prizes for each. The first part was problem-solving, comprising of fourteen challenging questions to be completed in one hour as a team. The second was a poster round for which the students had to do independent research on a non-curricular Maths topic, Graph Theory, and bring along their findings to help answer additional questions and create a poster for display.

The students gave an outstanding performance in the problem-solving competition achieving first place with a score of 52 out of 56. They also did very well in the Poster competition, achieving second place, with a very good piece of work which reflected the great effort they made beforehand in preparation for the day.

Their achievements are very impressive considering that the students who took part in this competition represent some of the most mathematically able individuals in the County. The team should be congratulated, not only for their success, but also for their efforts and conduct which were superb in every respect.