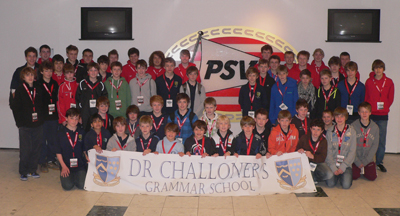 On Easter Monday, 51 students and seven staff set out for Holland on the school's first joint football and hockey tour. Following the successful junior football tour to Spain two years ago, the Year 7 and 8 football squads were joined this time by the all-conquering 1st XI Hockey team. Having settled into the hotel in Valkenburg, the teams embarked on a busy programme of training and matches, and after a long school season in England the students were very keen to compete against European opposition.

The hockey team started their campaign with an 11-0 victory while the Year 7s also got their tour off to a winning start. On the second day of matches all three teams competed and produced a clean sweep for Challoner's. The final afternoon saw the football teams win three further games while the hockey team put on a real exhibition against a very strong local side to win 4-0. Overall, Challoner's won all nine of the matches played and at the end of the tour, the Master Class coaches made special awards to Michael Ferguson (Year 7), Tom Player (Year 8) and James Easter (Year 13) as the players who had most caught the eye.

The students had time away from the sports field to enjoy other activities such as tobogganing, laser tag and ten-pin bowling, and they were also treated to a tour of the Philips Stadium, home of top Dutch team PSV Eindhoven, where the highlight was the amazing circular home dressing room! It was a highly successful trip, enjoyed by all.